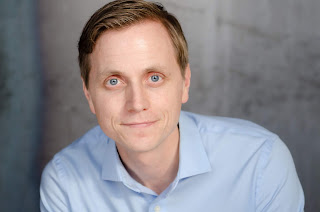 Ryan Schabach has technology on the brain.

“I’m thinking about the play all the time,” he confides. “It’s like software running in the background, constantly updating itself.”

He and I are strolling in Red Arrow Park, under the shadow of City Hall. We’re looking for shade so we can discuss his upcoming work at the helm of UNNECESSARY FARCE, the first production of MCT’s 45th season. It’s a serendipitously appropriate backdrop—the play follows an accountant and police officers’ undercover hunt to catch an embezzler of city funds.

“Keycards,” he says suddenly. He’s fully present, but I can see the program running, the wheels turning as he walks. He’s operating on fifteen levels at once as we find a bench and settle in. “Right now,” he explains, “I’m thinking about how there are a hundred keycards in this play! I need to track them. We all need to know who has what keycard when. We need to know how long it’ll take to grab a keycard and get through three doors.”

Preparing to direct any piece means combing over an astonishing amount of detail. For Ryan, that includes determining exactly when FARCE takes place, as the script requires specific technology—a video camera behind a ficus, videotapes, a “big brick of a cell phone,” and, yes, that host of hotel keycards.

That’s not all. Playwright Paul Slade Smith has upped the ante on the formula of a bedroom farce with this piece (yep, read “undercover” as a double entendre). Most feature the convention of comic near misses through slamming doors, usually around six; FARCE sports eight. Many classic farces’ characters have the feeling of caricatures; they’re painted with broad strokes. With FARCE, Ryan shares, there’s something extra, something earnest about the heroes of the play. “This is new territory for me,” Ryan says. He’s worked with MCT as an actor, fight choreographer, and playwright, but he’s about to make his directing debut for the company. “I’ve spent so much time on the boards looking and listening out. The director’s job is to be an audience member, to look for clarity of moments. I’ve just got to see if the math works out here,” he adds, laughing.

Given the challenges of this particular play, from its design to that comedy math, he’s confident about how to achieve clarity in rehearsal: working precision and pacing from the beginning. “In order to give my artists the best footing from which to develop the play, I need to start with what is the one thing actors have to be confident on. In this situation, it’s space, surroundings, tempo, pace. We’re going to work on character, yes, emotional values, and more, but first we need to find out when a door slams. That informs the rest. With comfort will come the chance to deepen in.”

I’m not surprised by his reply: Ryan’s one of the most gifted and precise comedians with whom I’ve ever worked. He’s inventive, buoyant, and kind in the rehearsal hall. I ask him about his love for comedy, and he practically glows with his devotion. “Comedy is the hardest of all the genres,” he declares. “It’s taken most of my time and dedication to this craft. I could spend a lifetime figuring out these clown roles. A million lifetimes.”

I detour, jumping on the notion of time. Farce is an ancient form, constantly reinvented with each new generation of audiences. I want Ryan’s take on its thriving in our culture: “Why comedy, why farce? Why don’t humans ever get sick of farce?”

“An innate need to laugh,” he replies, and gazes out at the park. Joggers and Harleys pass us east to rendezvous at Bastille Days. Business-attires ending their days loosen ties and cut corners on crosswalks. Downtown Milwaukee in July is swimming with sunlight and a festival mood. For all that, there’s more to this portrait of a summer afternoon, more to this place than we can speak on in an hour. Yet, Ryan manages to address it as he hits at the heart of this vocation.

“We already live in a world that has a lot of suffering in it,” he reflects. “What if we use comedy to achieve change? What if we say, ‘Let’s laugh at this terrible situation’? In the audience, I may realize ‘Oh, I need to change this.’”

He elaborates. “What theatre does best is that it allows for empathy. Comedy, when produced well, allows the audience to have an involuntary physical reaction. We laugh. When that happens, it makes us instantaneously reflect. It opens our hearts, souls, selves. With that involuntary reaction, we have recognition. We see characters, real characters, in a ridiculous situation, and we think, ‘I’ve been there.’ We laugh, we gasp, we think, ‘I got out of it. Oh! I hope they get out of it!’ Theatre, comedy, allows us to have hope. To believe in hope.

“As opposed to whatever the opposite of comedy is called… tragedy? No, not tragedy...”

We both set to thinking.

“Defeatism,” he decides. “We see a betrayal, a darkness onstage, our empathetic reaction is going to be ‘that’s how the world is.’ You’re defeated.”

Ryan speaks generally in this moment, but I think back to something he’s said early in our conversation—that we, as artists, have a responsibility. I smile. What comes to mind in that moment is a real groaner, but I can’t help but think it: necessary farce.

Here’s to the clowns, Schabach. I can’t wait to see them. Keycards and all.


Posted by Milwaukee Chamber Theatre at 9:23 AM