A THOUSAND WORDS and The Federal Theatre Project 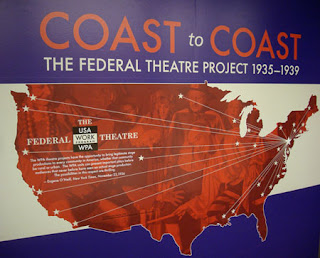 The Great Depression was a bleak time in American history. However, it was also a time of great innovation and creativity that is responsible for the art that we value today.  Our next production A Thousand Words highlights the photography of Walker Evans who was commissioned through the government by way of the Works Progress Administration (WPA). These photographs, originally purposed for the documentation of those suffering during the dust bowl, are highly recognizable pieces of art that instantly evoke the sense of turmoil those who experienced the Great Depression endured.
These photos are relics from the WPA as are many of our roads, bridges and dams.  But did you know that the WPA also made an endeavor into creating a federal theatre?  It was called the Federal Theatre Project (FTP) and although short lived it brought us theatre artists, technicians, and buildings that would not have existed otherwise.
The project, established in 1935, was challenged from the start as the economically devastated stage unions and artists opposed the idea of government controlled theatre.  The idea might have been lost from the start if not for the National Theatre Conference which provided the infrastructure for regional theatre and artist communication throughout the country. Hallie Flanagan, the head of the FTP, used the existing system and encouraged FTP productions both creatively and monetarily from coast to coast.
FTP laborers built theatres where there had never been theatres before. They used scavenged materials or revamped former factories and school houses or built entirely new buildings. They also trained technicians and designers, and gave actors, playwrights and directors the chance to flourish within the economic confines of the Great Depression. 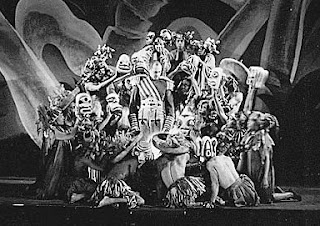 The FTP is even responsible for the training of many minorities in theatre arts and created the Negro Theatre Project who famously presented a Haitian “voodoo” Macbeth to a Harlem audience. The project not only enriched the minds of 1930’s audiences, but provided future audiences with revered artists such as Orson Welles, John Houseman, and Eugene O’Neil. 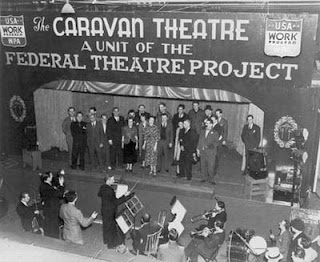 This project not only provided assistance and enrichment, but gave a source of lightheartedness and entertainment that was greatly needed in America at the time. Sadly, the program was cut short in 1939 as the government grew more suspicious of liberal leanings the productions may have portrayed and Hallie Flanagan was unwilling to compromise the artistic integrity of the productions to accommodate governmental censorship.
Perhaps the Federal Theatre Project was shut down because it worked too well. It created art that both represented its time as well as questioned its status. Hallie Flanagan, just as Walker Evans, was successful in creating art that not only was profitable, but meaningful as well.
http://memory.loc.gov/ammem/fedtp/fthome.html