From Page to Stage: Reflecting on My Young Playwrights Festival Experience

After the release of this year's Young Playwrights festival Top Ten, I took it upon myself to reflect on my own experience as a recent YPF Finalist.

The Young Playwrights Festival enabled me to share a part of myself with an audience in an empowering and rewarding experience.  Targeted towards people under 18, YPF gives teenagers the opportunity to try their hand at writing an original one act play with the support and guidance of MCT Education, spearheaded by Marcella Kearns (Education and Literary Manager). Submitted plays have the opportunity to be one of three selected to be produced in the biennial YPF Showcase. My play, STORAGE SPACE, was chosen for the 2014-2015 season.
STORAGE SPACE follows three siblings in the wake of their mother’s death as they unpack her storage space, draw up memories, and deal with the estrangement between the two sisters. The very fact that I finished the play remains something about which I’m very proud. Originally assigned as a project for my high school theatre class, I had no idea that I would produce something that I would enjoy writing, let alone see it on the stage. I wrote a story that felt important and reflected myself. I wrote what made me sad and conflicted, and what made me laugh.
Because Rufus King participates in the YPF Residency, I had the chance to work with both Marcy Kearns, who runs the program, and with peers who were also endeavoring to produce their own works. While I’ve been writing recreationally since a young age, playwriting was a new genre to me and Marcy’s guidance helped immensely. She not only taught us the proper format, but also emphasized defining elements of the genre of one act plays. We focused in on realistic dialogue, a progressive, character driven story, and feasibility of production.
After STORAGE SPACE was selected, I read the feedback from the panel who reviewed the scripts. I found several very different opinions, which gave me a sample of the many thoughts and interpretations that would come with putting my work on display for an audience much larger than my theatre class. Theatre is highly dependent on how theatre makers such as the director and actors interpret the script, so I had to consider how others might understand the context and meanings of my dialogue. The gates of director, designers, and actors between myself and the audience was daunting. I worried that my meaning might get lost in translation to the stage, but I had faith in my interpreters. 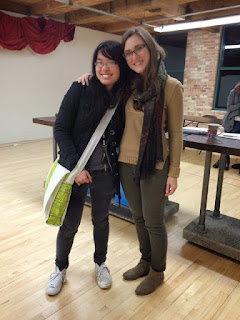 I sat in on auditions where I met my director, Mallory Metoxen, and had my first introduction to those who would put real faces and voices to my characters. I remember being flattered that so many people wanted to share in this experience with me, that so many talented actors read my words. They gave me a small glimpse of what STORAGE SPACE could be.

I entrusted Mallory, the actors, and designers with my play, knowing that the version in my mind would never be a perfect reality, but excited to see what they made of it. Mallory and I corresponded with questions about the script and from her and the cast, which comforted me. It was good to know they cared about what I meant and checked with me before making changes.
In the end, I was awestruck by how well interpreted the performance was. I felt that the actors captured the essence of the characters and found something I hadn’t known was there. Perhaps the most impressive idea was the rotating set that switched from living room to cluttered storage space. I never imagined spinning the location away, but found it innovative and exciting to see the set change interpreted in such a creative way.
Sitting in the full Studio Theatre with acquaintances and strangers alike felt surreal. Though I had never seen the production like the rest of the audience, I felt like I knew secrets, I had an eye for moments to anticipate and excitement for how challenges were handled. Having 90 people in a room focused on the story you have to tell, empathizing with the characters you created, laughing at the jokes you wrote (and the ones you didn’t plan), and making people feel is one of my proudest moments. 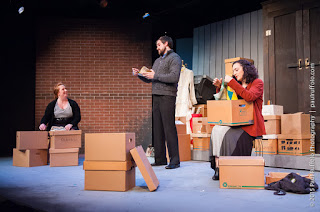 STORAGE SPACE is a standing example of an idea that became something larger. I highly encourage people to write simply to have the accomplishment of doing it if nothing else. Even if your play is not selected, you accomplish a great feat by writing something complete. Write what you want to write about, what you feel deserves to be written, and you will learn as a writer and perhaps as a person.

Posted by Unknown at 2:00 PM No comments: