An "industry" perspective on BOEING BOEING

As a flight attendant for United Airlines, I expected to be amused by a play about a womanizer juggling three “air hostesses” at the same time. The performance of BOEING BOEING by the Milwaukee Chamber Theatre provided far more than mere amusement with almost three hours of belly laughs. The retro comedic farce was hilarious and the actors were appropriately over-the-top with their accents and actions in spot-on performances filled with witty dialogue and physical antics.

Representing TWA, Lufthansa and Air Italia, Gloria, Gretchen and Gabriella managed to override the sexist situation of philandering fiancé Bernard with their own strong personalities. Anne Walaszek, Samantha Sostarich and Amber Smith were picture perfect in and out of their uniforms while bantering with their fiance Bernard, played by a subtly lecherous Brian Gill.

The rapid scrambling as each flight attendant entered and exited, barely missing encountering each other, required impeccable timing on the part of the actors. The facial expressions of Berthe, the housekeeper played by Marcella Kearns, and Robert, the friend from Wisconsin performed by Ryan Schabach, were remarkably animated. The moments the two of them were together were delightfully uninhibited. Being familiar with global flight patterns and the erratic airline schedules, I had to suspend reality knowing such a juggling act would be practically impossible but I was also aware that numerous global relationships do take place. Flight attendants still hop the pond to meet with boyfriends overseas.

I strongly recommend that you fly to the Broadway Theatre Center in Milwaukee’s Historic Third Ward and buckle your seat belt for a turbulent romp through this campy comedy. It’s a trip!

Posted by Milwaukee Chamber Theatre at 4:17 PM No comments: 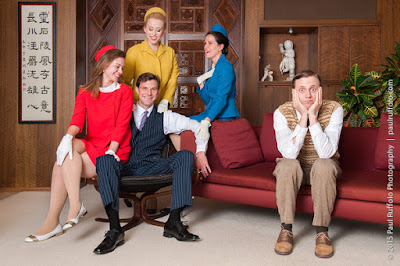 BOEING BOEING will be opening MCT’s 2015-2016 season. A French farce, the play is about a bachelor, Bernard, who has three air hostess fiancées and struggles to keep them from discovering each other with the help of his Wisconsinite friend, Robert, and maid, Berthe. I sat down with Ryan Schabach (Robert) and Marcella Kearns (Berthe) to talk about doors, characters, and cocktails.

For the actors, the implied comedy in the script of this bedroom farce stood out right away. “When you read it,” said Schabach, “it doesn’t do itself justice because you have to visualize—the comedy lies in the odd set of circumstances that comes with people going in and out of doors.”

The doors are an integral part of any farce, but exceptionally so in BOEING BOEING, which surpasses the traditional number of doors. While there are typically three doors in a farce, the play calls for seven, which have been adapted to six for this production. “I’m sure it’ll feel like twelve [doors],” Kearns joked.

The actors also discussed their characters with me. Kearns described her French maid character as having “a stereotypical sense of superiority and ennui” and said, “I think of a lot of her humor—besides how just odd she is—comes from that.”

I also asked about how Kearns has been developing her French accent. She has been working with Michelle Lopez-Rios, the production’s dialect coach, to “modify what might be a natural sounding accent for the stage.” She has also been building her French repertoire. “I spend 10-15 minutes every day speaking French. I can say things like ‘the men are calm and rich’ and ‘I am eating an orange with fish.’”

As Schabach delved into Robert’s origin story, some similarities between actor and character became apparent. “Robert was definitely raised on a farm in northern Wisconsin, so he gets to have the greatest accent ever. And he probably went to UW-Madison which, oddly enough, is everything that I really have done! So I get to use my own accent that I use in everyday speech and it’s wonderful.”

Bernard’s habits of keeping three fiancées is old hat for Berthe, but for Schabach’s character, Robert, it’s all new. “I think he’s a little…innocent,” Schabach said. “He comes into everything with overjoy. Everything is exciting, everything is new, kind of like a child seeing a toy for the very first time. I guess in my case it’s a dog playing with a toy for the very first time. It’s all new. It’s exciting. And the things that he’s never heard of that are scandalous are just beyond him.”

The play’s 1960s aviation theme is nothing new to Kearns, who comes from generations of military and commercial aviators. “I had grown up with pictures of people in uniform, but also of…the officers clubs overseas in Japan or hanging out in Hong Kong or Taiwan,” she said. “So the first impression I had of that era was of high fashion and flare and cocktails. It’s all about the cocktails. As soon as you walk in somebody hands you a drink. And I think that oddly enough really hits here in this play. There’s fashion and cocktails.”

To end our conversation on a high note, I asked the actors to compose their own dream trio in lieu of air hostesses. Rather than flight attendants, Kearns decided on pilots: Han Solo from Star Wars, Apollo from Battlestar Galactica, and the Wright Brothers (as a unit). Schabach went with a clan of influential women: Amelia Earhart, Cleopatra, and Eleanor Roosevelt.