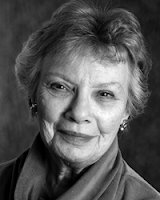 When MCT co-founder Ruth Schudson takes the stage in DRIVING MISS DAISY this fall it will mark her 65th production with Milwaukee Chamber Theatre! This occasion is a great opportunity to tell you more about our remarkable co-founder.

Ruth Schudson, the daughter of Russian immigrants, was born and raised in Wisconsin. Her father was an actor and director in Russia, which helped inspire her own theatrical aspirations. After graduating from Chicago’s Goodman School of Drama in 1947, she worked at regional theatres and helped found companies in Illinois and Oregon before realizing all she desired artistically was right here in Milwaukee.

In the 1950s, Ruth performed with groups including the Milwaukee Players and Alverno College, where she also taught. During this time she married Armand Schudson and had two children, Nia and David.

As her theatre career continued, she performed regularly at Milwaukee Repertory Theater, which is where she met fellow actor and director Montgomery Davis in the early 1970s. After seeing Ruth as Mrs. Gibbs in The Rep’s OUR TOWN, Monty asked Ruth to be in a production of Shaw's DON JUAN IN HELL, which they performed at Vogel Hall in June 1975. Monty and Ruth followed the success of that show with DEAR LIAR and Milwaukee Chamber Theatre was born!

At MCT, Ruth Schudson has played not only a wife and mother, but also a teenager, Ethel Rosenberg, a princess, Gertrude Stein, a serpent and even a rabbi!

Some of her other 65 appearances include WELL, ANGELS IN AMERICA: PERESTROIKA, THE ROAD TO MECCA, LOST IN YONKERS, TALKING HEADS, MISALLIANCE, KIMBERLY AKIMBO, HAY FEVER, JOE EGG, ANDROCLES AND THE LION and THE IMMIGRANT.

Ruth has also performed with Next Act Theatre, Skylight Opera Theatre, Madison Repertory Theatre and Princeton’s McCarter Theatre among others. Her film credits include The Hindenburg and a featured role in Baraboo.

Few actors have had as great an impact on the Milwaukee theatre community as Ruth Schudson. Throughout her career, she has served as a mentor, role model, and friend to countless aspiring and established actors. Milwaukee Chamber Theatre has chosen to honor this occasion by creating “The Ruth Schudson Leading Lady Fund.”

This donor designated fund will celebrate Ruth’s career and legacy by supporting the work of one MCT actress each season. The Ruth Schudson Leading Lady Fund not only pays tribute to this icon of Milwaukee theatre, but allows MCT to establish a more self-sustaining focus for the future. MCT will host a celebratory “Tribute to Ruth Schudson” on Monday, October 24 at the Broadway Theatre Center as a fundraiser for the Leading Lady Fund.

To make a contribution to the Fund or make a reservation for the Tribute, call MCT at 414.276.8842.
Posted by Milwaukee Chamber Theatre at 12:37 PM No comments: