It's official: A LOVELY SUNDAY FOR CREVE COEUR has stolen the hearts of critics and audience members alike! The late-period, rarely produced Tennessee Williams play has earned rave reviews in its first weekend, and we're excited for more people to see the play in the next three weeks (we close October 16).

But don't just take our word for it. Here's our collection of what several of Milwaukee's theatre critics had to say about the show. Don't forget to pick up your tickets at the MCT box office!

"Kelly Doherty gives her latest nuanced, supremely intelligent performance in sketching a woman who is both wistfully wise to life’s disappointments and determined to make the best of the hand she’s been dealt."

"Doing battle with Bodey for Dorothea’s soul, Molly Rhode adeptly straddles the line between snobby, deliciously snarky comments on Bodey’s life and pathos regarding her own profound loneliness."

Dave Begel, OnMilwaukee
"'A Lovely Sunday for Creve Coeur' is an unbridled joy at Chamber Theatre"

"For a play that is so riotously funny, the laughs easily give way to the famed Tennessee Williams sorrow in 'A Lovely Sunday for Creve Coeur.' The perfect production, which opened Friday night at Milwaukee Chamber Theatre, is one of the less frequently produced Williams plays, but the character portraits are familiar to anyone who knows Williams."

"The torrent of a variety of colors is an assault on the eyes ... set design by Courtney O'Neill captures all of the crampiness of this dwelling with a marvelous sense of space."

"The one thing this play needs is a special sense of clarity for each character. It only works with four distinct personalities that cross only briefly. And (director Leda) Hoffmann makes that happen."

"This play may be one that is rarely seen, but the production at Chamber makes it both valuable and vital."

"Milwaukee Chamber Theatre’s production of a little-known late work by Tennessee Williams, A Lovely Sunday for Creve Coeur, is a masterful study of loneliness, unlikely companionship and 'going on' after dreams are shattered."

"As the heart-and-soul character of the play, Bodey, Kelly Doherty is a force of nature. ... it’s fascinating to watch Doherty react in different ways and build gradually toward revelation of her character’s own unfulfilled desires and refusal to take any more verbal abuse."

"Dorothea is an unhappy civics teacher ... spinning her fantasies around an imagined life with a man of some social consequence. Kay Allmand vividly brings her personality to life."

"Masterfully directed by Leda Hoffman, this talented group of actors captures the dichotomy of a lovely Sunday amidst a quartet of broken hearts." 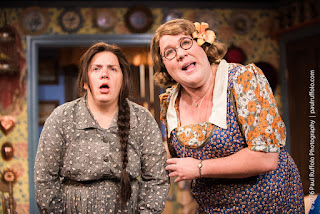 "Although 'creve coeur' is the French word for heartache, one discovers more humor than anguish in this sweet, funny play."

"Without her family or a solid grasp of English, Estrada demonstrates that Sophie is particularly isolated from the world around her ... (she) shines in this role." 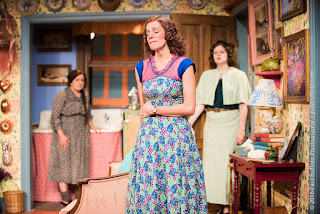 "There's more feminine prowess on the Broadway Center Studio Theatre stage than imaginable despite the levels of continual heartbreak."
Posted by Milwaukee Chamber Theatre at 10:34 AM No comments:

Daydreaming Within Reason: A Lesson from Tennesee Williams

“One wakes up in the morning and reaches for eyeglasses, coffee, and a myth. You can see that one needs vision, energy, and that myth. Otherwise, the day is simply impossible to face, endure, survive.” –Tennessee Williams

But what is the myth that Williams believes we reach for in the morning? The answer lies in his play, A LOVELY SUNDAY FOR CREVE COEUR, which follows a group of women as they hope their way through a Sunday. Dorothea, a 30-something schoolteacher, hopes for love. Bodey, her kind-hearted German roommate, hopes to pair Dorothea with Bodey’s twin brother. Helena, the local art teacher, hopes to feign class. And Miss Gluck, Dorothea and Bodey’s neighbor, hopes to survive the loss of her mother.

Helena reaches for the myth that one’s success is reflected in one’s wealth. More specifically, she believes that she can elevate herself socially by securing nicer housing. The myth that Helena reaches for is not an uncommon one; people often occupy their presents by working towards obtaining things, material things that they think will bring them mental ease.

Dorothea reaches for the myth that what she feels for her principal, Ralph Ellis, is love. Dorothea mistakes her admiration of Ralph Ellis’ class for adoration of Ralph Ellis as a person. She also perceives her sexual encounter with him as proof of his commitment to her. Believing there is a mutual commitment between herself and someone she adores, Dorothea—and, consequently, the audience—assumes she is in love. But if her hope goes unfulfilled, can the audience assume she is experiencing true heartbreak? Or is Dorothea just experiencing disappointment and loneliness as she hopes?

One character is without a doubt experiencing true heartbreak—Miss Gluck. Miss Gluck is being torn apart by the loss of her mother, yet her heartbreak is on the periphery of the play, emerging only as a comical inconvenience. With this structure, Williams criticizes people’s tendency to name disappointment heartbreak and shows that doing so discredits a supremely real and supremely difficult experience. It’s much like people who are late to eat their lunch describing themselves as starving. Frustratingly, Dorothea even equates her situation to Miss Gluck’s when she says, “Now Miss Gluck, now Sophie, we must pull ourselves together and go on.”

Moreover, this play serves to criticize how personal myths, like Dorothea’s “romantic illusions” (as Helena describes them), can waste a day; they can waste a lovely Sunday. Williams implies that relying on unfounded hope and waiting for unpromised outcomes may tend to lead to disappointment, disappointment that may be falsely named heartbreak. Myths can plunder the present. But he also claims that myths help us face, endure, and survive the day. Williams would likely suggest that we daydream within reason.

References
Grissom, James. Follies of God: Tennessee Williams and the Women of the Fog. New York, NY: Knopf, 2015.
Posted by Unknown at 12:02 PM No comments: