Ever since Milwaukee Chamber Theatre's FRANKIE AND JOHNNY IN THE CLAIR DE LUNE opened, critics have been raving about this Terrence McNally romance! Read these selections from their reviews, and don't forget to come see the play for yourself! Purchase tickets before October 15 by calling 414.291.7800 or visiting our online box office.

Lonely hearts grope for connection in magical 'Frankie and Johnny'

"One of the best and surely the bravest of the many excellent performances I’ve seen (Kearns) give, during the 12 years I’ve been watching her on stage."

"Kearns captures the consequent despair and self-loathing, of a woman who can’t love another because she hates herself. But she’s most heartbreaking in hiding from Johnny and even herself how badly she wants to believe in the fairy tale he’s spinning, as he begs her to let him stay."

"Denning – also excellent – suggests a man who isn’t quite sure he believes his own story."

"Don’t miss your chance to watch two actors at the top of their game, as characters searching for the courage we all need to seize the day and grab hold of each other." 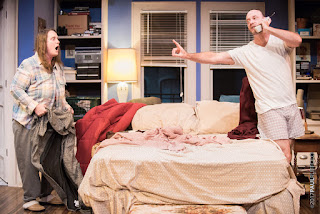 "Director Mary MacDonald Kerr orchestrates the give and take of the evolving relationship with a sure hand, balancing the humor and the painful self-revelations, allowing both actors to display McNally’s ample wit and charm. And in Kearns and Denning, she has two brave actors who are willing to bare all — both physically and emotionally." 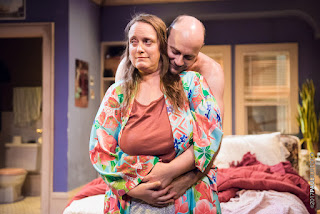 "Kearns's eyes, meanwhile, get wider and wider with every new line of crazy conversation that Johnny launches into, envisioning a happily-ever-after that she's given up on long ago. Her shoulders tense. Her arms cross. She puts on layers of clothes to protect herself. And then, in a moment that approaches true connection, her body melts into his, and her armor falls away. It's a beautiful scene, allowing the entire theater to exhale."

"Fortunately, Kearns and Denning are up for complicated. As Frankie, Kearns displays dozens of shades of shock, hurt, fear, disdain, vulnerability, anger and annoyance simply in her transparent face. Watching her is a masterclass in subtle changes of expression that communicate more clearly than paragraphs." 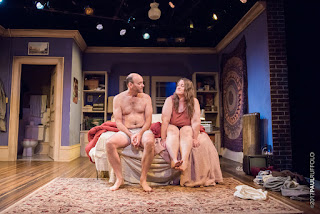 Russ Bickerstaff, Shepherd Express
A one night stand and something more

"Scenic designer Brandon Kirkham brings a very distinct ’87 look to the stage for the production. From the boom box and a few cassette cases on the far shelf to the missing kids on a milk carton, this show feels quite vividly like a couple of hours between two people getting an encore 30 years later."

"This sort of thing can be maddeningly tricky to bring into a theater: that feeling that two people are alone onstage baring their souls to each other. Under the direction of Mary MacDonald Kerr, Kearns and Denning are so convincing that it’s easy to forget that there’s a whole audience watching them." 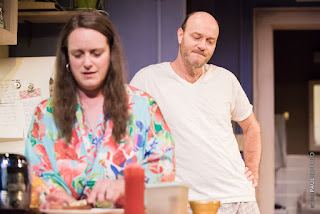 Julie McHale, Waukesha Freeman
'Frankie and Johnny': Characters you can relate to

"Both Kearns and Denning are master actors."

"See it. I strongly recommend it to anyone who has ever tried or failed or succeeded in understanding and loving another human being." 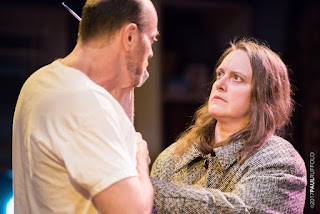 "This may be the most personal play to be staged in Milwaukee all season."

"I have seen both of them many times over their careers but this may be the finest and (most) dignified work by both Ms. Kearns and Mr. Denning."
Posted by Milwaukee Chamber Theatre at 11:32 AM No comments: