Christian O'Reilly's CHAPATTI tells a poignant, gentle tale of rediscovering the importance of human connection. Over its first week, critics have come to love this powerful story, and the way it's been told by actors James Tasse and Jenny Wanasek, and director Michelle Lopez-Rios.

We've compiled those great reviews below, so you can get a glimpse of what you're in for if you join us at the Studio Theatre. To get your tickets, visit us in person at 158 N Broadway, call 414.291.7800, or visit our online box office.

"The intimate Studio Theatre is an ideal environment for this type of play, since the audience becomes riveted by the characters’ every move."

"Director Michelle Lopez-Rios brings the two characters together slowly, as if in a slow waltz, and each moment they are together charms more than the next." 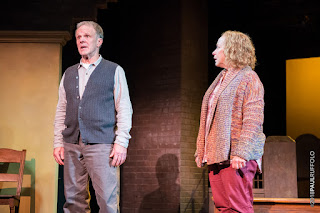 Dominique Paul Noth, Urban Milwaukee
"Dogs, Cats and the Humans Who Love Them"

"one of the finest acting performances of the season"

"Tasse and Wanasek ... are consummate Milwaukee professionals whose knowledgeable physical and vocal skills are here at their pinnacle under the guidance of director/dialect coach Michelle Lopez-Rios."

"both the playwright and the actors merit your attendance" 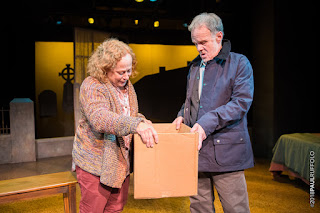 Gwen Rice, OnMilwaukee
"Chamber's 'Chapatti' is a warm, heartfelt charmer -- even without its leading dog"

"at the end of this vignette, the audience feels his loss keenly, even though there is no dog ... There is only Dan, played by the remarkable James Tasse"

"Director Lopez-Rios sets a nice pace for the 90-minute show and lets the seriousness of the story seep in, while never allowing the characters to wallow in despair." 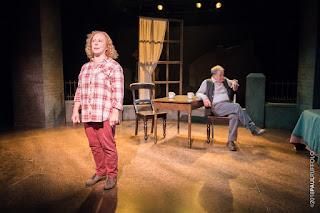 "This show depends on their ability to believably deliver O'Reilly's words, an Irish blend of the lyrical and the blunt, which they do."
Posted by Milwaukee Chamber Theatre at 10:41 AM No comments:

A Sentimental Journey: O'Reilly's CHAPATTI and THE GOOD FATHER

“God, you’re so corny,” says Jane to Tim, as he pleads with her to give their improbable relationship – between a lawyer and a house painter – a chance.

This exchange takes place in THE GOOD FATHER, staged by Milwaukee Chamber Theatre four years ago and written by Christian O’Reilly, the same Irish playwright who gave us CHAPATTI, another two-hander featuring lost and lonely souls searching for common ground.

When I reviewed THE GOOD FATHER for the Milwaukee Journal Sentinel, I called attention to that exchange, noting that the play’s unlikely romance was surely enough to make my readers roll their eyes – much as I was tempted to roll mine.

No surprise there. Throughout my fifteen years as a Journal Sentinel critic, I regularly called out plays that struck me as overly sentimental with adjectives like “maudlin” and “saccharine,” “cloying” and “bathetic.” Such plays tug at our heartstrings. But they also manipulatively play on our feelings. And they ultimately don’t ring true, betraying both audience and theatre itself.

Was THE GOOD FATHER actually such a play? And if so, why was I so moved as I left the theater on that long-ago Saturday afternoon in September, having just watched real-life marrieds Jonathan Wainwright and Laura Gray making magic together on stage?

Jane isn’t all wrong to label Tim “corny.” But as I wrote in my review, “that doesn’t mean she’s right. When both the world and the stage are filled with so much ironically cool snark, a quest like Tim’s may indeed seem corny. But such journeys can also be revolutionary.”

A play that’s too cerebral – or, worse, afraid of its own feelings – can leave an audience cold. A play that’s overheated – in which the sentiments being expressed are as manipulative as the plot – leaves an audience unwilling to credit or invest in the characters. Either way, the audience will be bored.

As the exchange with which I opened this blog post makes clear, O’Reilly himself is aware that one can easily overegg the pudding; Jane’s skeptical voice is among those playing in his head as he imagines what sort of life this couple might make together.

Tim pleads for love. Jane responds by calling him corny. Tim rebuts by making the case for faith and hope as love’s adjuncts. O’Reilly’s stage direction indicates that Jane reacts with “amused disbelief at his innocence.”

Cut to CHAPATTI, in which it’s the woman – sixty-something Betty – who is the sentimental one, while the similarly aged Dan comes across as the crusty realist. “I’m going to miss you,” Betty says to Dan, midway through the play. “Sure you don’t even know me,” he responds.

Shades of Tim and Jane: Betty believes that people can overcome their isolation; Dan is afraid to try. Betty reaches beyond herself and the beloved cats who keep her company; Dan retreats into the lonely world inhabited by himself and Chapatti, the dog who is his best and only friend.

Content dictates form: CHAPATTI moves between isolating monologues and genuine dialogue, featuring characters who can often only manage to talk to themselves – even as they make tentative efforts to engage each other and commit to the business of living, as two working-class people, stranded in old age and with little apparent reason to carry on.

Is there also a future for this pair? I won’t disclose that, either; you’ll need to come see the play.

O’Reilly’s nimble dance – in a play that flirts with love and death, the sentimental and the cynical, the great mysteries and the everyday – is performed by many Irish playwrights, among whom he is one of the newer and more promising voices.

Irish playwrights as distinct from each other as Brian Friel, Conor McPherson and Mark O’Rowe – each of whose work has been seen on Milwaukee stages in the past decade – write plays featuring intensely lyrical and confessional monologues.

Those monologues are emotional but also reflective, filled with feeling but also fiercely intelligent, expressing hope while frequently battling despair. Par for the course, in a country known for spirited and poetic flights of fancy as well as emotional restraint.

CHAPATTI manages to give us both, suggesting the original, much richer and more complex meaning of “sentimental.” As literary critic Janet Todd writes in her book “Sensibility,” the word “sentiment” once suggested “richness in moral reflection” as well as “all that was elevated and aesthetically pleasing in feeling” and “all that appealed to and expressed the finer emotions.”

It’s O’Reilly’s embodiment of this more nuanced sentimentalism that gave me pause four years ago, in refusing Jane’s invitation to dismiss her suitor as “corny.” There’s a similarly textured sentimentalism at work in CHAPATTI.

And sure, I’ll come clean: As this blog post suggests, there’s a comparable sentimentalism that’s intrinsic to who I am, as both a realist and an idealist – a tough-minded theatre critic and a closet romantic who comes to the theater willing to suspend disbelief.

Posted by Milwaukee Chamber Theatre at 4:11 PM No comments: