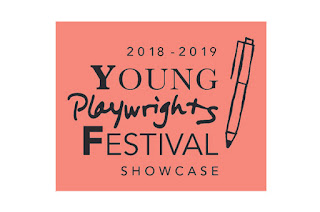 One of the things we love most about our Young Playwrights Festival Showcase is the opportunity we’re able to give to emerging local artists. It’s not just Milwaukee actors who benefit – our directing and design teams are also packed full of talented theatre artists.

Two of those artists are Marie Tredway and George Marn, the director and assistant director (respectively) of THE DIVINE KOMEDY, one of the three plays featured in the Showcase. As they went into tech rehearsals this week, we asked them to share a bit of what they’ve been thinking in the rehearsal room, and what they’ve learned about this piece and about directing. We’ve condensed their responses below – George’s thoughts in blue, and Marie’s in red – to give you a brief fly-on-the-wall glimpse behind the scenes.

These past few rehearsals have been both eye-opening and rewarding, as we've gotten the chance to really fine tune the character moments and tone of DIVINE KOMEDY. I'm always so grateful that we have the cast that we do, and that they've already put in so much work with memorization and character choices. We've added fight choreography, sound cues, and further refined the work we've done at the beginning. Normally I'm not used to having this much time to polish a piece that I'm working on.


I agree with you, George, about our stage of polish versus preparation. Even with such a short allotted rehearsal period, the DIVINE KOMEDY cast is in a great place because of their work put in outside of rehearsals. Their memorization and character intentions are so solid that we can usually fine-tune in rehearsals: fleshing out multi-dimensional characters and working on giving important moments levels.

That's where some of my questions have come from in the past few rehearsals. Since we're long past working on blocking or memorization, Marie and I having been giving notes on full runs for a while now. I've noticed that I take lots of notes and sometimes I think I'm being too "nitpicky" when I give notes. Do you think being overly specific in notes can be a problem? And when giving notes is it possible to give too many? Sometimes I worry that I might overload our cast.


I personally don't think specificity is a hindrance. Some people may see it as nitpicky, but the more detailed and thorough a note is, I think it helps an actor. Too many notes at once is a little overwhelming so what I try to do is focus on specific things during a working (start/stop) rehearsal.

For example, last week I wanted to focus on intentions and objectives. “What is your character trying to change in the other person?” “What's your tactic?” “How does it switch?” So most of our work and notes focused on that.

Last night we worked on integrating our sound cues helping fill in the different circles of our world – how does Hell differ in Circle Two than in Circle Seven? So my notes included: “How do we use the cues to help visualize and what does that mean for the actors?” We also worked on specific moments in the play – playing up comedic bits, finding the peaks and swells of monologues.

How far in advance do you plan out your challenges and goals for your actors versus responding to issues in the moment? I really enjoyed the specific rehearsals we had for fight choreography and intimacy.


I try to have a rough outline in my head. For example, I wanted to get blocking out of the way the first session. Then within the first week, I wanted to choreograph all our movement phrases. So I think it's important to have a general plan but because theatre is such a fluid process that's always in flux, plans have to be flexible, depending on what you feel the show needs. Is it missing nuance? Do we need to work on objectives? Do we need to finesse one moment? Gauging how a rehearsal went for the night and utilizing it for planning the next couple of rehearsals is what I usually do.

Intimacy exercises in particular is something that I like to do a little later on in the process, once the actors are more comfortable with each other and we can focus solely on relationship as opposed to filling out the general framework of first rehearsals.

MCT’s Young Playwrights Festival Showcase runs this week only: January 10 to 13 at the Broadway Theatre Center, 158 N. Broadway. Tickets are available now at 414.291.7800 or our online box office.

Posted by Milwaukee Chamber Theatre at 1:16 PM No comments: