Rave Reviews for A THOUSAND WORDS

A THOUSAND WORDS opened on Feb. 17 and the response has been fantastic. Below are some links to local reviews and other press about this world premiere production which is running at the Broadway Theatre Center until March 11th. Don't miss this amazing show!
REVIEWS:

As promised, here is another interview with a cast member of A Thousand Words (opening February 16th). This time it is actor  T. Stacy Hicks, who plays a total of three characters in this production. Here he offers insight into the experience of working on the show.

What has it been like for you to perform in the world premiere of a new play?

It's been a very exciting process originating not one but three new roles.  It's required a certain amount of dexterity and ingenuity to create three distinct characters, each with their own voice and personality.  Working on a new play allows the actor to have a hand in developing the piece, to make suggestions and to have input on how the play will finally take shape, not just in this run of the play but in all subsequent incarnations.  The product that the audience ultimately sees is usually a collaboration between the writer, director, and actors but a new play is even more so. 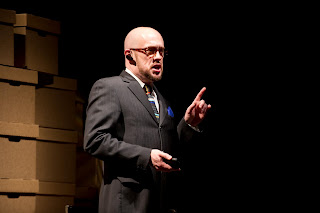 What is it like to have the playwright in the room to watch the development of the show?  How has this process affected your performance?

This is the second new show in a row on which I've worked and it's been a pleasure to have the playwright in the room both times.  I imagine, if one is a playwright that it's very easy to get too emotionally attached to the words you've written: too close and personal to maintain objectivity.  Fortunately that was not the case in either playwright with whom I've worked.  In both cases the author was open to changes and suggestions made by the cast and the director.  I imagine that a strong playwright would realize that having a group of smart actors work on their play would provide them with an opportunity to make improvements in the text.  Having the playwright in the room has been helpful in clarifying the intentions of my characters and allowed me to know the inspirations used in writing the words I get to perform.
Do you have any thoughts about the progression of the show as it moves from Madison to Milwaukee?

It's still a working, growing piece which is very exciting.  We continue to make changes so the show the Milwaukee audience sees will be a different one than the Madison audience saw.  We learned things in Madison that will affect how the show is presented in Milwaukee.  We're also putting the show into a slightly different, somewhat more intimate space in Milwaukee so that's going to change how the scenes play and where we'll place our focus.  The Milwaukee audience will have different tastes and aesthetics so I'm really excited to see how they might react differently and what resonates for them, how certain ideas land and are received.
This play is very topical in our current socioeconomic climate. What are your thoughts as an actor as to why this is a positive piece to be pursuing right at this point in American history?

I was somewhat taken aback in Madison by how one of my characters was viewed for that very reason.  Our Madison audience was passionate and often down right defensive when it comes to the subject of funding for the arts and who gets to profit from the work created by others.  I was heartened by their willingness (though I think it was somewhat misguided) to circle the wagons around and defend the creative process from those they saw as exploiters of creativity.  This is a very topical issue as more and more artists and arts organizations are stripped of their government funding and left to their own devices to supplement their work.  I also think, because of the duel time lines in the show, we really get to examine the ideas of intellectual property and controlling our image that have arisen as a result of the social media driven society in which we now live, issues that weren't even considered at the time in which Walker Evans was working.
Posted by Layna Davis at 9:40 AM No comments:

As you may know, our next show A THOUSAND WORDS is a collaboration with Forward Theater Company in Madison. It opened at the Overture Center on Jan. 19 and the entire production (cast, set, costumes, etc.) moves to Milwaukee and opens at the Broadway Theatre Center on Feb. 16.

The Madison run got a lot of great media coverage - here's a complete list of links for your reading pleasure!

Play asks: Who owns art? Who should profit from it?
~Michael Muckian, Wisconsin Gazette

'A Thousand Words' review: On perception before and after the shutter clicks
~Lindsay Christians, 77 Square

Posted by Milwaukee Chamber Theatre at 12:05 PM No comments:

A THOUSAND WORDS: An interview with Libby Amato

A THOUSAND WORDS is just on the horizon for MCT (opening February 16th) and the excitement is definitely growing. Despite busy schedules, the actors were kind enough to take time out to answer some of our questions. I will be posting their responses here as they
come in starting with Libby Amato who portrays not one, but two characters in A THOUSAND WORDS: Jessica Shoemaker and Abbie Lehman. Below Libby shares her perspective of the experience. 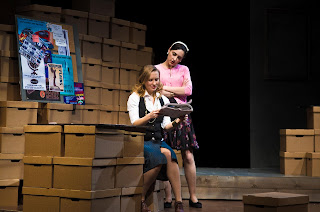 for you to perform in the world premiere of a new play?

It's pretty exciting that we're bringing these characters to life on stage for the first time. We've all had a hand in shaping the world of the play. It feels like a big responsibility! I wonder how other actors, directors, and designers might envision this world in the future, and I feel fortunate to have been here for the first full production.

What is it like to have the playwright in the room to watch the development of the show? How has this process affected your performance?

Gwen is such a talented writer, and she was very open to all of our ideas and thoughts about the play. We were able to have some great discussions and she welcomed our questions. I think there was the potential for it to be a difficult situation, but instead it was lovely. Everyone came in with their own interpretation of the script, and it was a room full of smart, talented people. It was wonderful to see all those ideas come together to create this production.
Do you have any thoughts about the progression of the
show as it moves from Madison to Milwaukee?

The theatres are very different, so there will have to be some adjustments to technical aspects. But I think the most interesting difference will be in our audiences. Milwaukee and Madison both have unique atmospheres. I can't wait to see how Milwaukee patrons will react to the show! 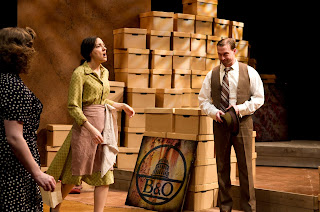 (From left: Molly Rhode, Libby Amato, Josh Aaron McCabe; Photo by Nick Berard)
This play is very topical in our current socioeconomic climate. What are your thoughts as an actor as to why this is a positive piece to be pursuing right at this point in Americanhistory?

My brother came to see the show right after learning about Walker Evans in a college classand it gave us the opportunity to talk about many of the issues raised in the play. I love the questions this play asks about art. What is the cost of art, versus the value of art? What compromises need to be made in order for art to survive? Where is the balance between maintaining the purity of the artwork, and treating the subject with respect? It was interesting for me to learn more about the FSA (Farm Security Administration) and how art was used as a tool for change. Makes you think about how that might be happening today, in less obvious ways. I hope we'll really get people thinking.