SLOWGIRL: One Week Until Preview!

This past Sunday, we had our designer run.  For those who might not know, a designer run is the first time that all of the show’s designers come for the first time to watch the actors perform the play in the rehearsal hall.  At around the halfway point in the rehearsal process (the end of week two), the designers, who’ve been working hard from home and production builds, come to see what the actors are doing onstage.  The lighting designer can get a better sense of where the actors are moving onstage to focus his lighting instruments and the scenic designer can suss out what parts of the set might need to be more fortified to support the actors and make them feel safe.  We're getting excited for folks to finally see this moving play a week from today at our Pay-What-You-Can Preview performance on Wednesday Feb. 24! 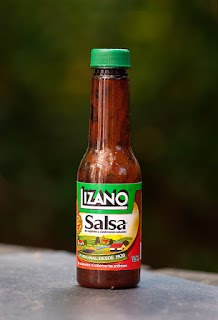 Props designer Melissa Centgraf has been hard at work on something we all love: FOOD!!  In the play, Sterling makes Becky a special dish called Chicken Los Angeles for her last meal in Costa Rica, and Melissa has tracked down a special ingredient for us.  A thin, light brown sauce, Lizano is a common condiment in Costa Rica, and found on restaurant tables as often as ketchup is “in the States.”  We put some Lizano on noodles, and thought it was pretty tasty!  The ingredients include water, sugar, salt, vegetables (onions, carrots, cauliflower, cucumbers), spices, pepper, mustard, and turmeric.  In the United States, Lizano can be purchased online and at specialty food stores.  Give it a try!

As soon as Renaissance Theaterworks’ beautiful production of AGNES OF GOD closed in the Studio Theatre on Sunday, our crew and designers started loading in the set for SLOWGIRL.  We’ll continue exploring the play in the rehearsal hall until Friday when the set will be fully constructed, painted, and decorated.  And then we’ll head downstairs for tech rehearsals!  You’ll hear from me again then… 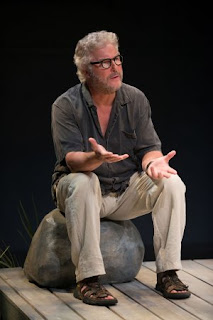 But in the meantime, here’s a fun piece of trivia!  In the production of SLOWGIRL co-produced by Chicago’s Steppenwolf Theatre Company and Los Angeles’ Geffen Playhouse, Sterling was played by William Peterson, who you’ll recognize from his many years on CSI!
Posted by Alexander Coddington at 1:54 PM No comments:

We’ve just begun work on our second week of rehearsal for SLOWGIRL.  As Michael Wright’s assistant director (and friendly neighborhood MCT Audience Development Coordinator), I will be providing eager Chamber-holics, as some of our biggest fans like to call themselves, at home with a glimpse into the magic that goes on inside Rehearsal Hall 5B.

Our first week kicked off with a meet-and-greet reception where many of you had the opportunity to mingle with the artists involved with the show.  (First rehearsal meet-and-greets are just one of the many perks of being a member of the MCT Friends – contact me for more information about joining the Friends at alex@milwaukeechambertheatre.com!!)

We got to hear some insights into Michael Wright’s directorial vision for the play, which follows a girl and her uncle through an emotionally tumultuous week in the Costa Rican jungle, look at beautiful preliminary design renderings by costume designer Kimberly O’Callaghan (COLLECTED STORIES, CRIMES OF THE HEART) and an intricate miniature model of the set made by scenic designer Keith Pitts (‘ART’, AROUND THE WORLD IN 80 DAYS), and heard actors Peter Reeves and Sara Zientek read Greg Pierce’s play aloud.

Peter returns to MCT after appearing in THE SWEETEST SWING IN BASEBALL in 2010 and A WALK IN THE WOODS in 2007. He is currently the Communications Director for Pius XI Catholic High School in Milwaukee. However, after SLOWGIRL closes he will be moving to Pennsylvania – so this may be his last appearance on stage in Milwaukee. He has appeared in numerous films and commercials and has performed with Next Act Theatre, Renaissance Theaterworks, First Stage, American Inside Theatre and Next Generation Theatre.

Sara made her MCT debut in MAURITIUS in 2011. She was part of the Milwaukee Repertory Theater Emerging Professional Residency. She has also worked with First Stage, InTandem Theatre, Splinter Group, Umbrella Group and Optimist Theatre.  She has been a teacher for First Stage, Waukesha Civic Theatre and Next Act Theatre, and was also a part of an educational tour of ROMEO AND JULIET with Utah Shakespeare Festival. She received her BA in acting from UW-Milwaukee.

So far, it’s been smooth sailing down to Costa Rica, but that doesn’t mean we’re not hard at work!  It’s an emotionally challenging and structurally interesting play that has been a thrill to experience in the rehearsal room.  Salud!
Posted by Alexander Coddington at 2:47 PM 1 comment:

In the 1990s, the labyrinth, an ancient spiritual symbol with roots around the globe, enjoyed a resurgence and renaissance in disparate communities of retreat, healing, and faith. Now, with Greg Pierce’s SLOWGIRL, MCT brings its own labyrinth to the Milwaukee stage. Both literally and figuratively, Pierce etches a labyrinthine journey into the heart of his piece. For your enjoyment, here’s a primer on this evocative symbol.

Significantly for the play, labyrinths and mazes aren’t the same beast. This separation is critical, though the two are so often equated the difference is usually lost. Mazes are “multicursal,” with many paths, and tend to puzzle or trap those who enter. Sometimes, it’s a mortal affair, like the most famous maze of western lore—the Minotaur’s maze in Crete, into which King Minos sent tributes of young Athenians for the monster to devour. The challenge of most mazes isn’t so mortally risky a quest, though recent young adult book and film franchises are capitalizing on that conceit. Still, the maze, by definition, presents the potential for failure given its twists.

A labyrinth, on the other hand, has only one path. Ari Berk paraphrases Hermann Kern’s complex definition so:
…a true labyrinth is a structure or design whose path can assume numerous forms, but cannot intersect itself. There are no choices for the traveler. You must enter and exit in the same place. Also, your path will fold back on itself, changing direction frequently, and will fill the entire space within its boundaries. It will move you temptingly past the center and then away again before leading you, eventually, to the center. (16)

The design of the Chartres Cathedral labyrinth in France fits this definition beautifully. A rosette with six sides forms its heart, around which multiple curves radiate in four directions and loop back on themselves. One entrance, like the stem of a flower, doubles as its exit. Built into the floor of the cathedral in the early 1200s, the labyrinth served as a pilgrimage-in-place for Christians who couldn’t make the trek to the Holy Land. Today, copies of the Chartres design and simpler models, which have bloomed as painted canvas, stone in grass, inlaid stone inside and outdoors, and even finger-tracing sculpture, can be found in multiple locations across the United States. Several of Milwaukee’s faith communities boast their own portable or inlaid design.

Walking a well-constructed labyrinth is a simple but potentially powerful form of meditation, if not for indefinable spiritual benefit, at the very least for mathematical satisfaction. A guide published by St. Mary Catholic Faith Community in Hales Corners suggests that a pilgrim walking the labyrinth considers three phases in her walk: purgation (letting go cares and concerns), illumination (being open to receive what is there at the center), and union (bringing a refreshed spirit back to the world). The single path allows opportunity for contemplation at this level or simple enjoyment of order, of beauty.

It’s this design which Greg Pierce conjures as a central symbol—and, arguably, plot structure—in SLOWGIRL. The character Sterling, played by Peter Reeves, has exiled himself from the United States and taken up residence in Costa Rica. He has built himself a labyrinth, a place of contemplation, order, and retreat. His teenage niece Becky (Sara Zientek) encounters the labyrinth without the same reverence, but possibly with the same level of need. The estranged family members, two pilgrims untangling the most difficult events of their own lives, couldn’t be more different, but the labyrinth calls them both.

What will happen? No spoilers, but optimism recalls the sweet secret of a labyrinth. As contemporary spiritual practitioners maintain, one who chooses to enter the labyrinth can’t get lost. There are no wrong turns. There are no dead ends. The fundamental choice is the choice to enter. As long as he enters, and keeps walking, he will reach the center of the labyrinth and its secret heart. Then, as long as he keeps on walking, he will come out again.

Heinen, Tom. “For many, a walk through a labyrinth evokes a circuitous spiritual journey.” Milwaukee Journal Sentinel 13 April 1998: 1A, 8A.
Posted by Milwaukee Chamber Theatre at 3:47 PM No comments: