Violence by Design: An Interview with Fight Director Christopher Elst

A few summers ago, I saw a sequence of torture and murder onstage that horrified me in all the right ways—simply, it looked real. Fully immersed in the tension of the moment, I forgot for a moment where I was. In hindsight, however, I realized I hadn’t for an instant worried about the actors both perpetrating and undergoing the crime not ten feet from me in real time. Why?

Elst, fight director for MCT’s production of DEATHTRAP, has a gift for making an audience squirm with the kind of intricate physical storytelling that follows when conflict between characters escalates beyond words alone. Since seeing his work for the first time those summers ago, I’ve been insatiably curious about his process and his own story. Recently, even as he wrapped Theater RED’s latest production (Elst and spouse Marcee Doherty-Elst are the company’s producing directors), he graciously granted a request for an interview.

Marcella Kearns: What originally drew you to undertaking the study of violence design (stage combat)? What continues to captivate you about this aspect of the theatre?

Christopher Elst: I started in high school when I heard about the “fencing” program for the high school Madrigal Dinner in Kenosha. I had always had an eye for swords and martial arts and thought this might be a way to start learning more. I was “captain” of the team in my senior year, but it was really more of an acting troupe than anything. I began to assist the teachers in my first year out of high school, and then began teaching it myself shortly thereafter. I joined the SAFD (Society of American Fight Directors), at the urging of Jamie Cheatham, in 2006 and have pursued stage combat as a profession ever since. 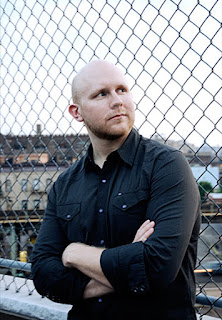 MK: Tell us about your personal process in building physical fights onstage. How do you approach a script and your work in the rehearsal hall?

CE: Theatrical violence incorporates the most important aspects of theatrical performance: objectives and commitment at the very highest stakes, physical communication and cooperation between actors, and a dual awareness at both the character and actor levels. For me, stage combat informs all of my work as an actor.

I consider stage combat to be a modern martial art, focused on storytelling, rather than defense, in the same way that many Eastern disciplines teach that violence and destruction are set aside in favor of aesthetic creation. A master becomes an artist, as the understanding of violence reminds one of their human nature—the earth, the id, the beast, etc.—but channeling that directionless passion are the creative and rational drives. As artists in the theatre, the consummation of all arts, we have the ability and responsibility to bring this violence as realistically to bear as we are able in order to confront and discuss, and perhaps to change, the way in which we accept and cope with our natural tendency toward violence.

To that end, it is essential that we as fight directors give our actors the tools required to tell these stories. By necessity, we begin to help with precautions against harm; beyond the obvious preservation of the body, if the actor must hesitate because of a safety concern, then we have hindered the story by whatever fraction that hesitation costs. Contrarily, when we instill in actors the knowledge and practice to free them of the constraint of fear, we not only allow that particular scene to come alive, but we bring the actors to a greater state of awareness and commitment, which can only serve them in all aspects of performance.

The responsibility is colossal for fight directors, as with any teachers, to keep this always in mind. We must understand fear, violence, and all of the darkest parts of our humanity in order to create compelling art, but we must be in command of those forces, and teach others to be in command of them, if that art is to be of value.

CE: Classical acting training once mandated that all actors be trained in stage combat, but it’s rare to run across someone with more than cursory knowledge today, which is surprising when one considers all of the popular media that features violence. Working with an actor unfamiliar mostly poses challenges in getting the appropriate commitment level; they are usually either too timid or too eager. I am fond of saying, “Keep your method acting out of my stage combat, please.”

Contrarily, with actors accustomed to the work, including me, the trick is to remind them of the dangers the characters face and not to be too complacent in the responses. Also, veteran stage combatants can cling to bad habits, or make a character seem facile with a weapon, when the character should not be. Being too comfortable with stage violence can be detrimental to the story, even if safety is more assured.

MK: There are several weapons revealed as part of the setting of DEATHTRAP. If you had your pick, which of those would be most exciting to you to use in a fight and why?

CE: I have to say, I was drawn to the work by swords, and I’m still fascinated by them, even with my facility in their use. There’s a reason other weapons just never found their way as strongly into the canon of theatrical violence, and indeed, history. There have always been swords. Their elegance and effectiveness are unsurpassed.

MK: Along the same lines, what do you enjoy most about DEATHTRAP, both as an artist working on the team and as one who gets to see it from the house?

CE: Long before I considered the theatre as an occupation, I had seen the film version of DEATHTRAP. I love the blend of dark humor and true thrills, and I hope to bring the actors to a place where they can startle even me with this production.

MK: If it’s possible to answer this without spoilers: what do you foresee may be the most challenging thing for you to accomplish (and/or the actors to execute… no pun intended…) on DEATHTRAP?

CE: Theatrical violence is no different than a magic trick. The challenge here is that we never know which effect is meant to be real and which is a character fooling another character and the audience. We want to create that duplicity without belying the truth of each moment. That will take some real focus, and I think we have a great team to make it happen.

MK: Do you have any “dream plays” to choreograph?

CE: I think I’d like to have a chance at THE THREE MUSKETEERS or something in that vein. BONNY ANNE BONNY (with Theater RED) was the closest I’ve come, and we did a bang-up job if I say so myself, but those old swashbuckling epics were the beacon to me in my youth, and I’d like to see what I can do when realism is no limit.

Elst’s innovation seems to have no limit. Join us at MCT for DEATHTRAP — with him in charge of the fights, we can guarantee the thrills.

Posted by Unknown at 9:36 AM No comments: